Kyra Kyrklund was born in Finland 1951. She started riding in Helsinki Keskustalli when she was 11 years old. Kyra started her competing career in Lahti, Finland in 1967. The borrowed horse was called Dragon and it was the Nordic Championship. Two years later Kyra got a horse of her own, Kasper, and she did show jumping, eventing and dressage and was very succesful in all of them.

During the years Kyra Kyrklund has become the most succesful Finnish dressage rider. She has competed in six Olympics, two more times she was nominated in a team but could not participate in as her horse was injured. She has been coached by Walter Christensen, Herbert Rehbein and her husband Richard White.

As a coach Kyra Kyrklund is also one of the tops in the world. She is internationally well known, liked and succesful dressage trainer, and she travels around the world holding clinics and working with riders and horses. Kyra has worked with Jan Brink, Emma Hindle, Nathalie Zu Sayn-Wittgenstein ja Imke Schellekens-Bartels among the others. 1988 the Finnish Olympic riding team (became 6th) was trained by her. She also coached the Finnish dressage team for the London Olympics 2012.

"Kyra Kyrklund is one of those dressage characters who is not only a Champion rider in her own right but has an uncanny ability to impart her knowledge in a way that every person listening can easily understand and relate to. This teacher has a way with words that makes logical truth simple and understandable."
Read more from EquestrianLife, Roger Fitzhardinge gets mesmorized by Kyra Kyrklund 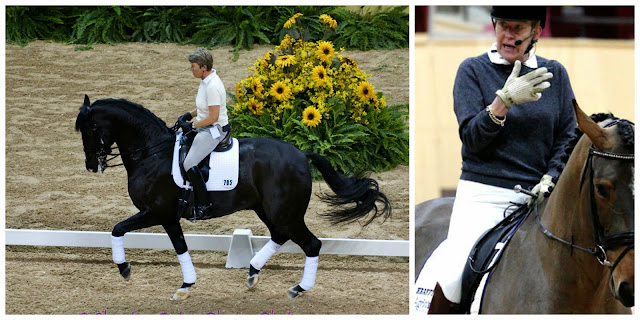 Not only riders, she has trained more than ten horses to the international GP -level and also competed succesfully at the same time. Matador, Edinburg, Master and Max are names most of us are familiar with.

Her best known horse is probably the carismatic stallion Matador II. Together they won the World Championships silver in 1990 and the first prize in World Cup Finals 1991. Unfortunately the Japanese owners decided to sell Matador and it looked like she was going to be without a horse. Fortunately she found a petite, black, Russian stud Edinburg, bought it and only six months later she was 5th in the Olympic Games with this unexperienced stallion 1992. It was sensational.

The last National Championships Kyra took part in with Max, a Swedish half-breed gelding. Max was born in 1995 and is a descendant of stud Master. They were succesful in Aachen World Championships 2006, 2007 in World Cup Finals Las Vegas, next year in 's-Hertogenbosch and in Peking Olympics 2008. In September 2009 Kyra announced that it is time for Max to retire and to start living happy, carefree, stressless horse life.

Plastron Max is named after this beautiful horse and the first one ever was made of Max's hair for Kyra Kyrklund. Nanna Salmi met Kyra in Hamina Bastion Horse Show 2001 and Kyra asked for a plastron. The plastron was designed and made and since then it has been one of the most popular designs in the collection. 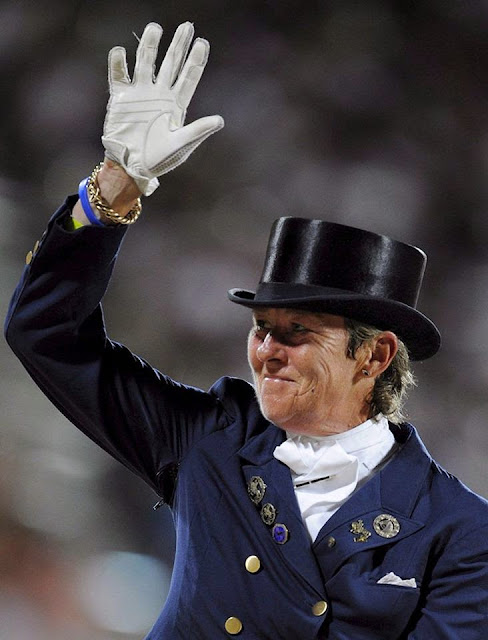 Kyra riding and wearing 'Max' in Olympic Finals 2008, Photo yle.fi
Would someone, or yourself, NEED a plastron needle made of
own horse´s tail hair? In case "yes", contact us!
Enquiries and orders also by email
minna.maattanen@nannasalmi.com 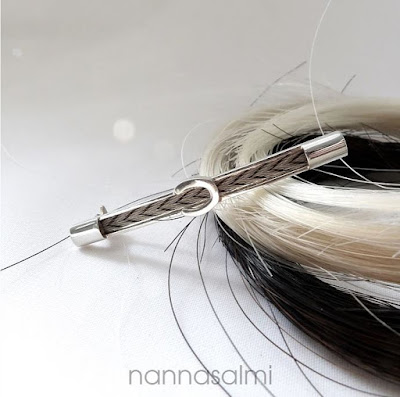