Be aware of the copies, even using te name "Salmi"

We have been quiet about this. We wish not to have negative
energy on our pages and we wish not to interfere anybody
else´s business. But we can´t be quiet anymore.

We will publish some messages and testimonials we have received from people
around the world. They are not all here, just some of them.

These customers have thought that we are the same company and asked for help.
Unfortunately we can´t help them as this company has got nothing to do with us,
but we feel deeply for these betrayed customers.

We also believe that all customers betrayed by Tomi Salmi / House of Salmi
have not contacted us. The latest message came two weeks ago from UK.

These people have lost money, but more important,
some of them have lost all they have had left of their late horse - the tail hair.

These messages are published by the permission of the customers and they
are authentic.

"In February 2013, I purchased a ring from Tomi at "House of Salmi" thinking it was another company. I put down a payment for the ring I purchased and was given the run around on delivery date.  I was told it was ready and completed my purchase which totaled out to around $300 US.

I never received my ring.  I was also told it would have hair from Animal Kingdom (Kentucky Derby winner that year).  I paid extra for it as well.  I continued to inquire about my purchase and I stopped receiving any messages from Tomi or House of Salmi after a few rude responses from him, all my comments regarding my experience with Tomi and House of Salmi were deleted from the Facebook page.  My review was deleted and I was subsequently deleted and blocked from the House of Salmi website.

I took action by contacting Nanna Salmi thinking it was the same company just to find out Tomi and House of Salmi was a knock of to the original and they were not affiliated.  Ultimately, Nanna Salmi had received numerous complaints from customers of Tomi and House of Salmi and to this day 3 years later, I have heard nothing from Tomi or House of Salmi, I am still blocked from their Facebook (which has been closed out and reopened numerous times, likely due to having to delete all the disgruntled customers) and I have obviously never received the product I paid for or gotten any sort of refund."


"I ordered a nannasalmi bracelet and paid it for Tomi Salmi/House of Salmi (then Equisetum Ky, nannasalmi -retailer) in September 2012. In November I inquired the state of my order. Later in November I contacted him again wanting to cancel my order because of an exorbitant delivery time. I asked him to refund my payment.
I never got my bracelet or my money or my horse’s hair back, and my emails were blocked."


"I ordered In March 2011 a nannasalmi bracelet worth of 920 € from Equisetum Ky/Tomi Salmi. Months were passing and my bracelet did not arrive. I wrote several e-mails to Tomi Salmi and got different kinds of explanations for the delay.
One year later my e-mails were blocked and I was not able to reach him or Equisetum Ky anymore. And I never got back hair of my old pony...
Two years later, 2014, I happened to meet Tomi Salmi in a horse show in Germany with his new company "House of Salmi". I confronted him and finally he promised to pay 200€ per month to compensate my losses. I have never got a single cent from him."


"My husband’s 60th birthday was coming and I wanted to give to him nannasalmi cufflinks made of his breeding stallion’s hair (worth 1110 €). I contacted nannasalmi reseller of that time, Equisetum Ky, and ordered and paid the cufflinks in February 2011.
In July 2011 I finally got them, but the quality was really bad.
I called Tomi Salmi and he said it was a proto type pair. I sent the cufflinks back in September, and finally in summer 2013, I got back the same pair of proto type cufflinks. I never got the final product or my payment back though I contacted Tomi Salmi several times by e-mails and telephone. Then he blocked my e-mails and calls."


Posted: 2015-06-05 by     T.L.W.- USA
Item not rec'd/no communication
House of Salmi, Stolberg, Germany
"In February of 2014 I ordered a custom ring to be made with the tail hair of my deceased horse. The required deposit was placed and the hair sent to Germany. It has now been almost 16 months and I have not yet received the ring. .... READ MORE


Posted: 2016-02-03 by     Reviewer47982
Horse Hair Bracelet
"I ordered a bracelet on October 18th and paid the deposit due. The hair was mailed the next day and I received confirmation of this.(...) This company is very unprofessional, lacks communication and I would not trust them with something that you cannot afford to lose." READ IT ALL HERE

Edit 2.11.2017
"Hi, do you have anything to do with House of Salmi?
Because nearly 12 months ago I paid for a ring to be made over £200. It took over 6 months to make it and when it finally came it was far too small, never measured anywhere near the size I asked for. So the ring was sent back!
Then they said it had been lost in the office and that they would make a new one for me. To that I replied: "with what hair?" as they had sent my horse hair back!
Since my last email it's been 2 months and I've had no reply to any of my emails and no answer to the phone. I´m so I'm so disappointed: no refund, no ring."


Betrayed clients have contacted us because of HoS’s routine business policies. At first clients get a variation of reasons of delays starting from technical difficulties in a manufacturing process to lost hair and jewellery shippings. In the end Tomi Salmi / House of Salmi  blocks their e-mails, does not answer their telephone calls and deletes unpleasant
complains in Facebook page and blocks people out there as well.
After that you have no way to reach him.

Tomi Salmi also changes the company names and countries they are registered in. He has had
companies registered in Finland (Equisetum Ky), in Estonia, UK and now in Germany. We
don´t exactly know which ones of them are active at the moment but here is one registered in
Germany, link: House of Salmi UG

If you have lost your money and want to make a report, here is the
contact information to his local police, Polizeipräsidium Aachen:

Here you can see what Tomi Salmi did with the company page of nannasalmi: he just changed the name and started doing his "own busineess".  It´s understandable that people heve been confused... Almost the same name, almost the same product - the idea and fans stolen.
Unfortunately we still can´t do anything and Facebook is not interested in.

If we only could have them forever - the beloved Horses

Nothing is "forever". Unfortunately.
But our own little "forever" is as long as we live.

We remeber the first kiss as well as we remember the
first time in the saddle.

We remember how it felt like to find the right one
- boyfriend, husband - or the horse.
We remember when the children were born as well
as we remember the foals our mares had.

And we remember that joyous, warm
feeling when we really loved somebody.

There are many happy moments in our lives we
will cherish in our hearts.

And they can´t be taken away from us. They will
follow and stay with us - for our forever.
As long as we live.

nannasalmi collection is inspired by the genuine love for horses.
It reflects all that they can give us and the things we´ll never forget:
love, understanding, joy, trust, beauty of life - you name it.

If you wish to have a keepsake made with your own horse´s
hair, please, visit our web pages and get yourself one!

Thank you for visiting the blog!

Email ThisBlogThis!Share to TwitterShare to FacebookShare to Pinterest
Labels: About horses, About the collection

It´s Always a Miracle - A Foal

Perhaps you remember Hovin Inka? A beautiful Finnhorse mare we have
written about before?  In May 2015 it was about a Finnhorse in general. We
think she is a perfect example about this horse race:
Finn horse - A Loyal Companion

In February 2016 she showed us what the real winter is - with Finnhorse:
February - The real Winter Month

Now she is a brand new, proud mother!

Tinka´s (Inkan Totinka) father is Vihi-Totti. Mating was performed as an artificial insemination
17 and 19.5. "During the gestation Inka became, if possible, even smoother and easier as she
had no more rutting seasons. In the end of gestation she spent a lot of time alone, away from
other horses, but toward people she got more cuddly," Juha tells.

This picture was taken in the end of April. She seems to think
that it is no time for foaling yet. 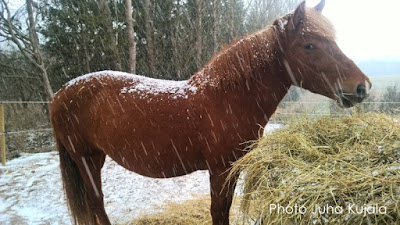 After 348 days, 30th of April, Inka started foaling. In only one hour the brand
new baby was out in the world and standing on her own feet. 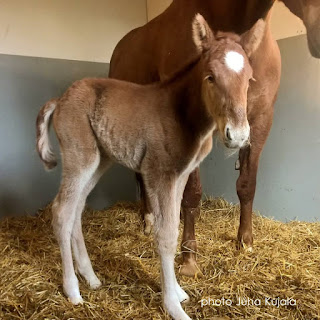 The perfect little horse got a name Tinka.
(Inkan Totinka) 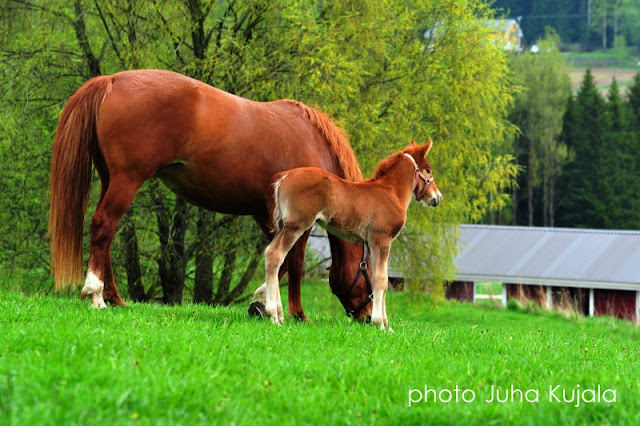 What a place to start a new life! 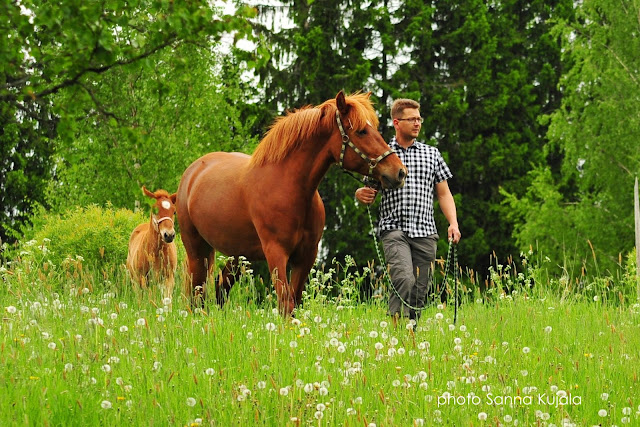 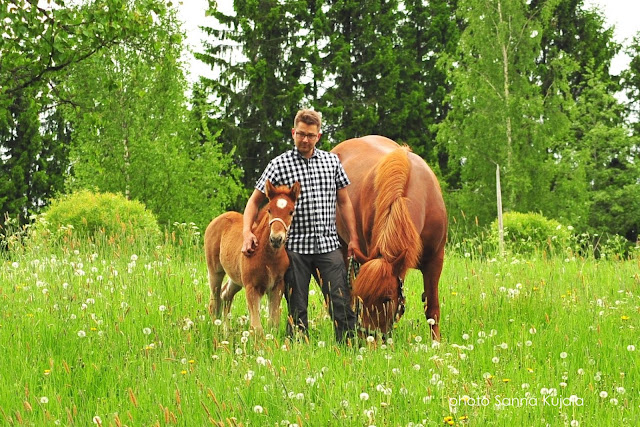 "As a mother Inka is calm, confident and gentle. It´s heart warming to see how she
shows the world and teaches the small one. She´s not very jealous or over protective,
but sometimes she tells the other horses not to come near. With people she is confident
and lets us near the foal with no problem." 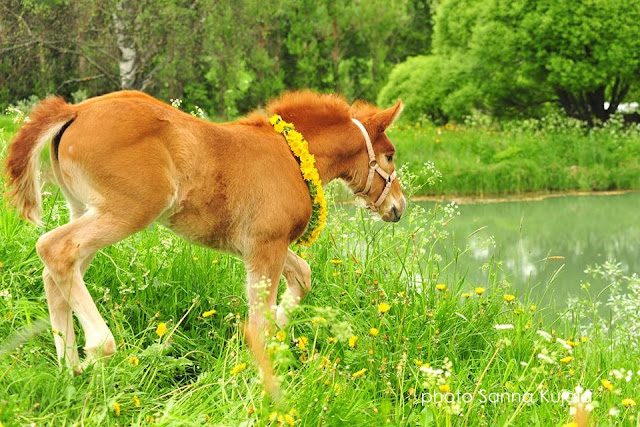 Juha tells that Tinka is very brave and curious. And super sweet! 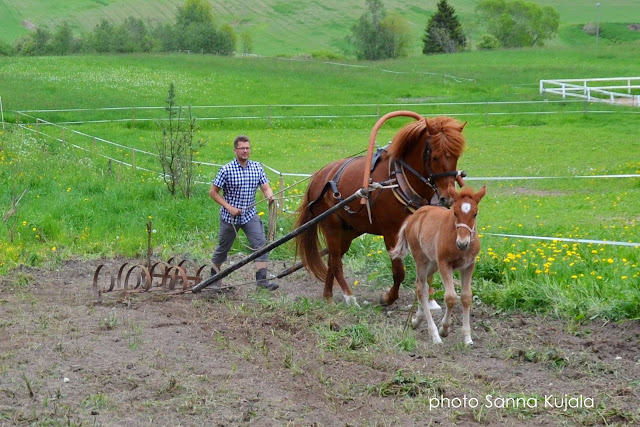 This is how it was in the old days. When mom had to start working, the
children followed her in the fields and forests. And for sure they
learned something, too.

Hovin Inka is a working mother.
Here you can get to know her business better:
www.inkantinki.com