For us Easter is a celebration of spring and light. The dates are not always
the same and therefor each year is different when it comes to the weather. Sometimes
we still have a lot of snow, sometimes we have eaten the Easter lunch on the veranda.
This year defenately indoors...

When celebrating Easter in Finland, we mix old heathen traditions and christian
traditions, western and eastern, quite smoothly.

Last Sunday, Palm Sunday, little witches went from a house to house with
decorated willow branches. In christians tradition the branches are the symbols for
Jesus´ journey and palm leaves. This tradition comes from the eastern, Orthodox part of
Finland. Houses, livestock and crop were blessed with these branches and who ever
brought a branch got a little bounty for it.

Why are children dressed up like witches?
This tradition is purely heathen: in western Finland and in an European tradition
Easter time has been a time of evil sprits and witches malevolent towards domestic
animals. It was believed that the god´s protection was not very strong during the night
between Good Friday and Holy Saturday. Some people pretended to be witches and
bonfires were lit to banish evil spirits.

These two traditions were mixed in the end of 1970´s, and now the children
have a new tradition.

It´s great fun to decorate the branches and very exciting to go from a door to door...

Bonfires are burned in Ostrobothnia. We also do it in our family but for us most important
is to meet friends and enjoy the living fire.

On Sunday our family gets together for the Easter lunch. See the eggs in the
middle! They are the best chocolate eggs in the world, made into a real egg
shell. See how the Mignon eggs are made HERE

Lamb is always on menu as well as the Paskha. It is a festive dish made in Eastern
Orthodox countries which consists of food that is forbidden during the fast of Great Lent.

Horses have no big role in the Easter traditions. If you wish to decorate the
branches with theme you have to make the decoration yourself...

Happy Easter time to everybody! 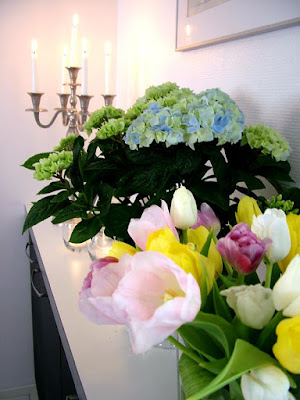 Email ThisBlogThis!Share to TwitterShare to FacebookShare to Pinterest
Labels: Holidays

We all have seen all kinds of horses, but last weekend, in Helsinki Horse Fair,
we saw something new... A small, beautiful brown horse, Yakut horse. 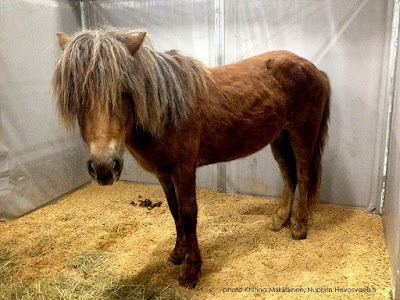 There he was, charming every one!

First question was: "where on Earth is Yakutia?"

Yakutia is in northeast Asia. It covers 20 % of Russia and it´s four times as big as France.
The country has only about 1 000 000 inhabitants. Over 70% of acreage is mountain range
and the highest point is Mountain Pobeda, 3 147 m. Climate is continental and it´s coldest
area of Siberia. Winters are long and hard, summers short and hot. In Yakutia you
get everything between -50° C and +40° C.

There is tundra and taiga, polar nights and light summer nights. In Yakutia you find
endless steppes, enormous wasteland and huge rivers. Yakutian lakes are full of fish,
forests full of berries and wild animals. To survive in Yakutian wilderness, the animals
have to stand extreme cold - buffalos and these unique horses can - and they know how
to find food under ice and snow. 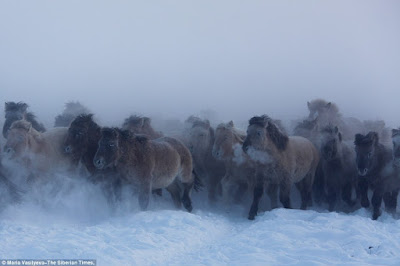 Yakut horse looks a lot like Mongolian, Icelandic or Przewalski's horse. Finnhorses
are also related to this breed. In Yakutia the horses live wild but also domesticated.
They are used for transportation, riding and producing milk and meat.

Yakut horses are gutsy and tough and they can be ridden earlier than "ordinary" horses.
They don´t wear shoes and their wintercoat can be 10 cm long. Height is about 140 cm but
even if they are that small, they can carry a man. They have four gaits: gait, trot and gallop.
Yakut horses are not suitable for dressage or showjumping because of their size and
build, but they are a perfect companion for trail riding, no matter what kind of conditions.
They are kind, cool and meek but a bit stubborn. There are not too many Yakut horses outside of Russia. In Helsinki we met
the lucky lady, Kristina Mäkäläinen, who had brought her three year old stallion,
Zardon, to the show.

"My father comes from Tiksi. It´s a small town in Yakutia, on the coast of the Arctic Ocean.
When I was a child my father told me about these extraordinary horses", Kristina remembers.
"He told that the horses lived on their own, wild. He also said that usually the horses were
white or yellow and he, as a small boy, wore boots made of horse leather. It all sounded
so fascinating, exotic and exciting..."

"Since I was a child I´ve been dreaming of having a Yakut horse... A friend of mine had the same
dream and then came a day we decided to look for ones and bring them to Finland!
Bringing horses from Siberia to Finland would have been very expensive and complicated,
but we were lucky enough to find a breeder near Moscow."

"We brought four horses with us: mares Myshka,  Zolodinka and Fialka and the stallion
Zardon. Buying and bringing horses from Moscow to Finland was quite an experience,
but next time we will go all the way to beautiful Yakutia..." 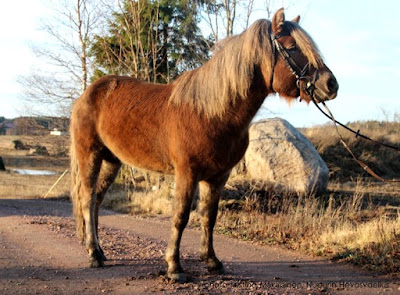 Zardon is the only Yakut stallion in Finland. He´s still young, only three years old.
He lives at the stables in Espoo, Nupuri.
Nupurin Hevosvaellus in Facebook
www.nupurinhevosvaellus.fi

"Zardon is the `dear boy´ in our family. He is the only stallion in the herd
and considers himself as the `BOSS´", Kristina says laughing.

It was fantastic to meet you, Kristina and Zardon!
Hopefully we´ll meet again...

Read more about the Yakutian Horse Breeders:
One of toughest jobs in Yakutia, Russia’s Siberia

Email ThisBlogThis!Share to TwitterShare to FacebookShare to Pinterest
Labels: Horses around the world

March is the first real spring month. Here in Finland we still have snow
but the spring is in the air. Summer seems to be far, far away but now
it would be a perfect moment to think about the spring time celebratioins:
mother´s day, graduation parties, birthdays, anniversaries etc.

What would be a perfect gift for a horse loving person?
Yep, that´s right - a horsehair jewellery. 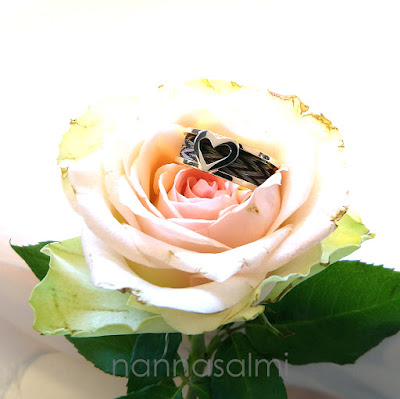 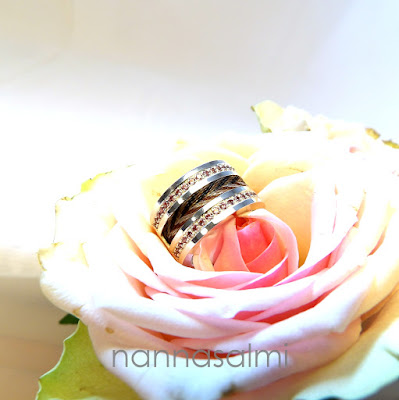 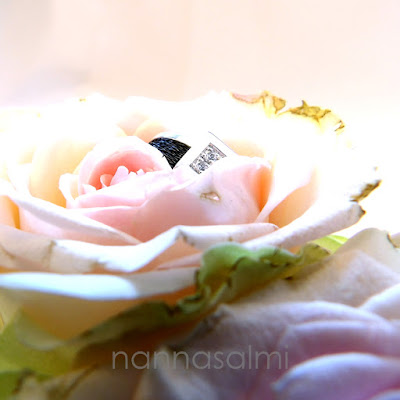 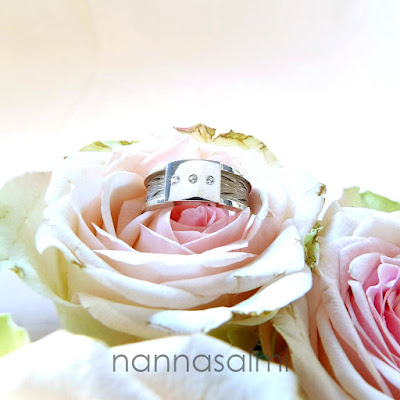 All the items are custom made, ribbons woven of your
own horse´s hair (or stock hair when required).

We haven´t forgotten men either:
In the collection you find cufflinks, tiebars
and a plastron needle as well. 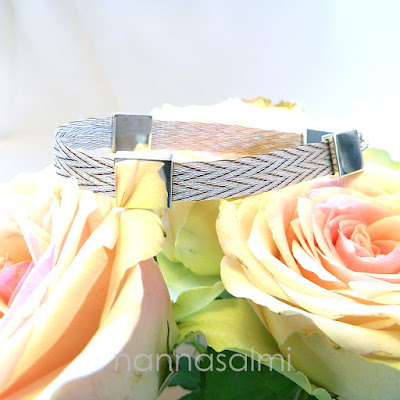 If you wish to serve something very special in your party,
here´s a tip:

Cocktail created by Mick Jeffries on commission for the owners of
2009 Kentucky Derby horse Friesan Fire. 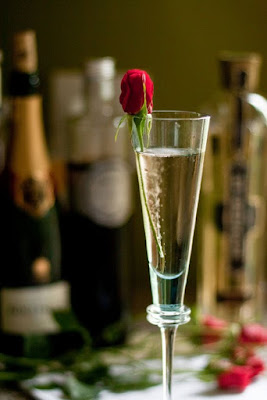 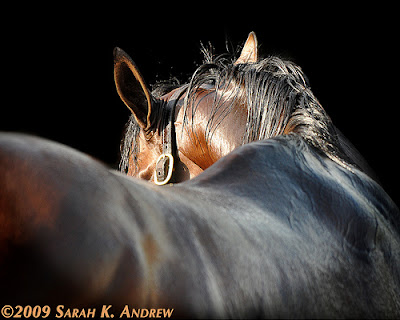 Email ThisBlogThis!Share to TwitterShare to FacebookShare to Pinterest
Labels: About the collection, Custom made, Give it as a gift
Newer Posts Older Posts Home
Subscribe to: Posts (Atom)