Like every nation we also have our national song, animal, plant etc. We also have a national epic called "Kalevala", 19th century work of epic poetry compiled by Elias Lönnrot from Karelian and Finnish oral folklore and mythology.

There is everything in Kalevala: the world is created, there is the land of death. Caracters experience jealousy, love and hatered. There are battles, magical powers, dangerous unreasonable tasks, weddings, fratricide, you name it...

It is one of the most significant works of Finnish literature and it had a big role in the development of the Finnish national identity, the intensification of Finland's language strife and the growing sense of nationality that ultimately led to Finland's independence from Russia in 1917.

Kalevala has inspired Tolkien and many, many artists, also Akseli Gallen-Kallela. This is one of my favourite paintings from him: Kullervon Sotaanlähtö / Kullervo going to war. 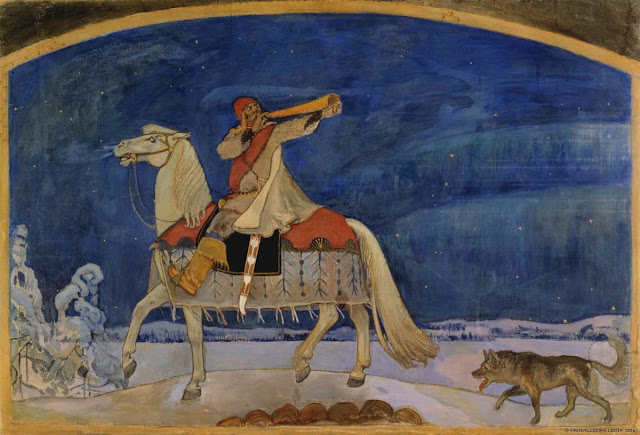 The story behind the picture in short, source Wikipedia

"Untamo kills his brother Kalervo’s people, but spares his wife who later begets Kullervo. Untamo sees the boy as a threat, and after trying to have him killed several times without success, sells Kullervo as a slave to Ilmarinen. Ilmarinen's wife torments and bullies Kullervo, so he tricks her into being torn apart by a pack of wolves and bears. Kullervo escapes from Ilmarinen's homestead and learns from an old lady in the forest that his family is still alive, and is soon reunited with them.

While returning home from paying taxes, he meets and seduces a young maiden, only to find out that she is his sister. She kills herself and Kullervo returns home distressed. He decides to wreak revenge upon Untamo and sets out to find him. Kullervo wages war on Untamo and his people, laying all to waste, and then returns home, where he finds his farm deserted. Filled with remorse and regret, he kills himself in the place where he seduced his sister."

Dark stories...Nothing has changed since the stories of ancient Greek... I think every nation has got the stories pretty similar: how the world was created, what is fair and what is not. What comes after death, which are the moral rules. Sometimes it´s good to get back to the "old stuff" - back to basics...

Read more about
Kalevala in Wikipedia

On this Kalevala day we wish to greet all the Finns living abroad.
We know that this country means a lot to you and we are glad that so
many of you are in contact with us in one way or another.

World is a big place, but people are the same -
everywhere.

Email ThisBlogThis!Share to TwitterShare to FacebookShare to Pinterest
Tunnisteet: Art and Literature, Finland