Rubber boots (or rain boots or wellies) are quite often
the most practical foot wear, even in the city.  Thank god - they all don´t
look that bad or boring anymore! 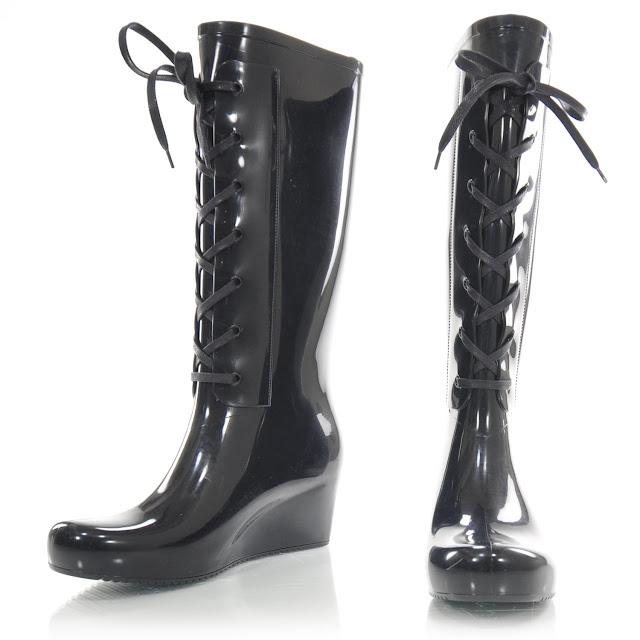 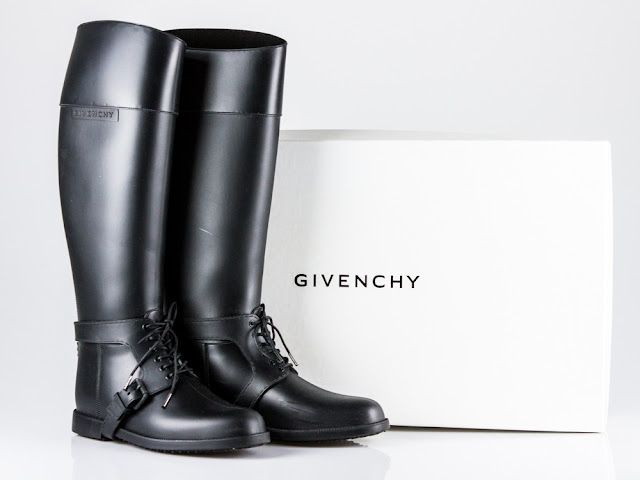 - Givenchy boots with the equestrian touch - 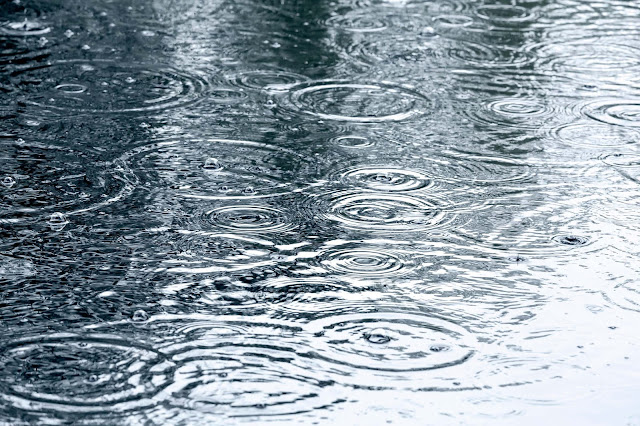 If the day looks too grey, maybe something like this would cheer you up! 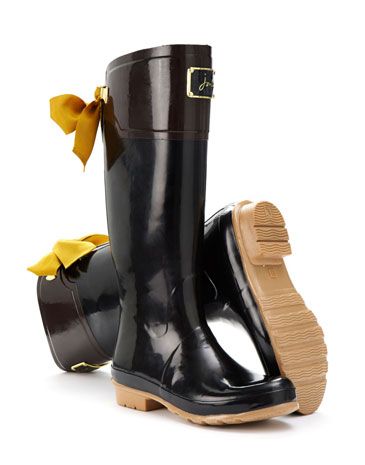 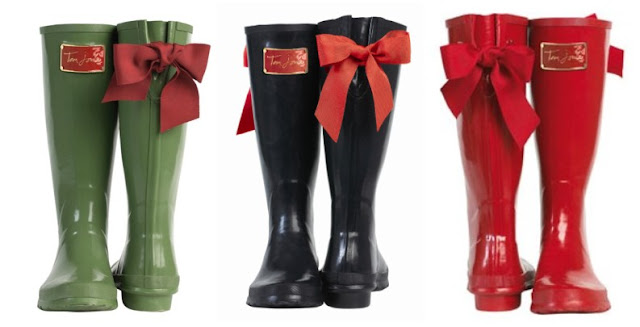 Horses, dogs, gardening - or all of them?

-JOULES has got these and plenty more...- 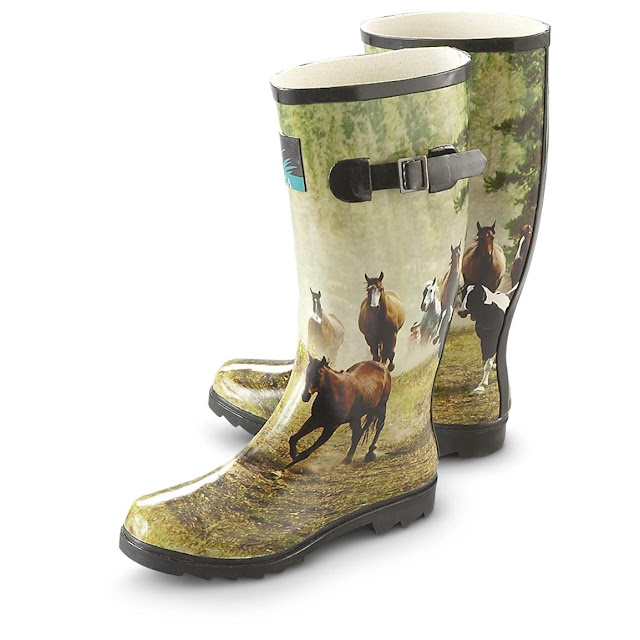 Would you rather come up with your own style? 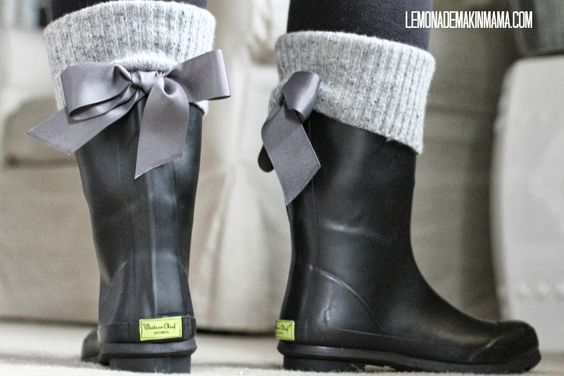 This is how we imagine we look like in a Horse Show...
(Read tips from www.fashionisers.com) 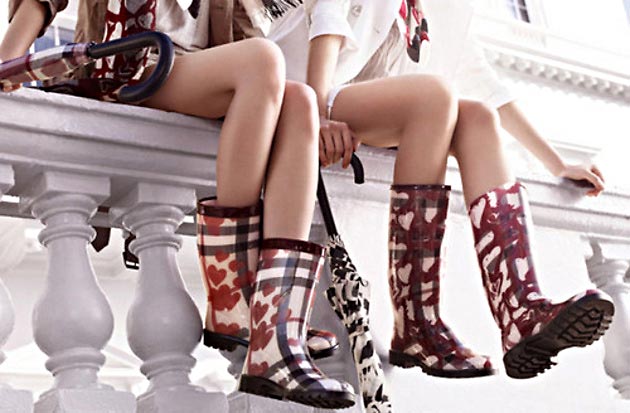 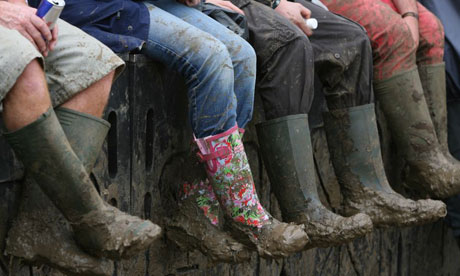 Wear your wellies at the stables, in the city
- you surely will look very, very pretty!
And, of course:
You would need a matching ring with your wellies: 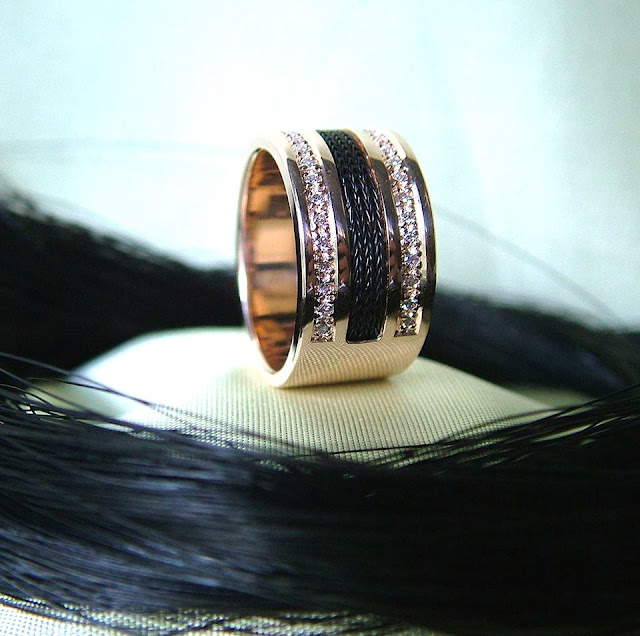 For chocolate lovers the Finnish Easter has something very special and delicious to offer:

The Mignon chocolate egg is an Easter confectionery made by the Finnish Fazer company. A real egg shell is filled with almond-hazelnut nougat and it tastes absolutely fantastic. The Mignon Easter egg is the second oldest Fazer product, dating back from 1896, when Karl Fazer brought the recipe from Germany.

1. The word "Mignon" is a synonym for sweet and cute.

2. The filling is made of almonds, hazelnuts and cocoa butter, no milk is used.

3. The eggs are hand made. 45 professionals make them every year. The season is from November till March.

4. The Mignon egg has always had famous admirers. Russian czar Nikolai II was the first one and the eggs belonged to the Easter traditions of the court side by side with the valuable Fabergé -eggs.

5. Every year 1,6 million empty egg shells are transported from Kaarina to Fazer, Vantaa. The shells have to be packed very carefully and they fill 23 trucks.
6. The hole is made into an egg with a diamond drill and the egg yolk is sucked out. The yolks are used in the other products of The Fazer Bakery.

7. The shells are washed and disinfected and dried over night in warm. The hole has to be symmetric, if it´s not, the shell will be put aside and these shells are sent to children´s day care for the kids to decorate.

A Mignon egg is an extraordinary,
unforgettable experience. 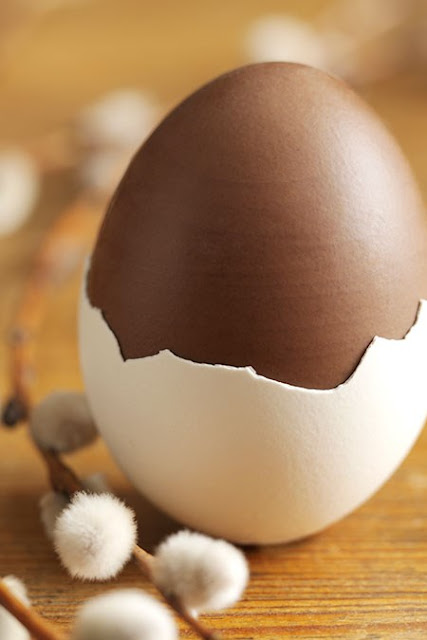 See how it´s made:

Where to buy them? Here is one link: candyhero.com
Because the Mignon eggs are made into a real egg shell, they can also be decorated
like the real, "ordinary eggs".
Nanna loves painting them and every year she paints a few. 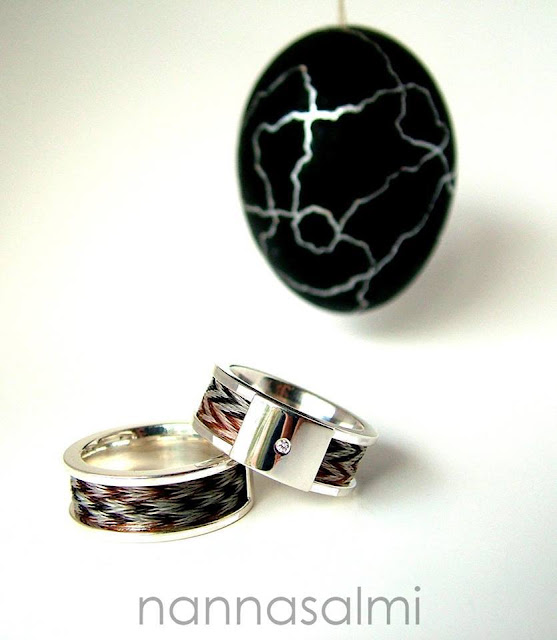 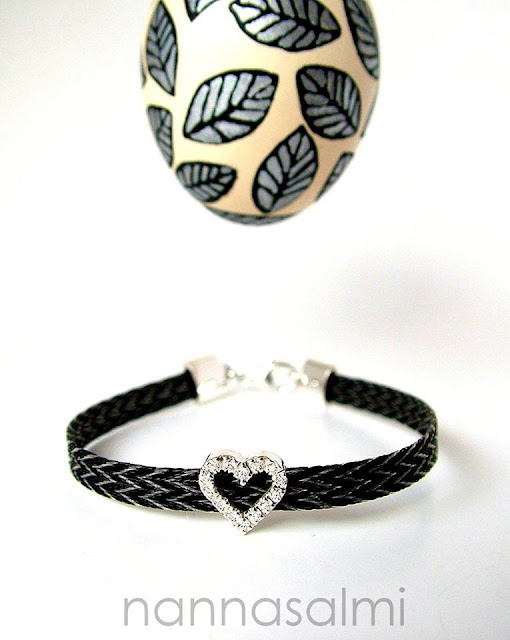 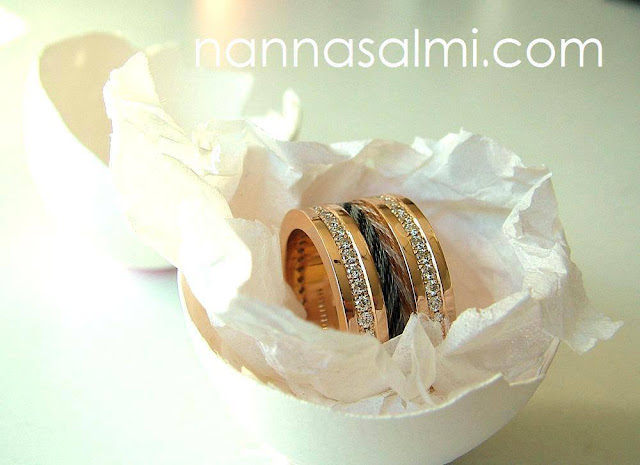 Sometimes you get an Easter egg without chocolate,
but diamonds might consolate a little...
Ring Cassiopeia, horse hair ribbon 3 mm, 54 diamonds
We wish you all very happy and delicious Easter time! 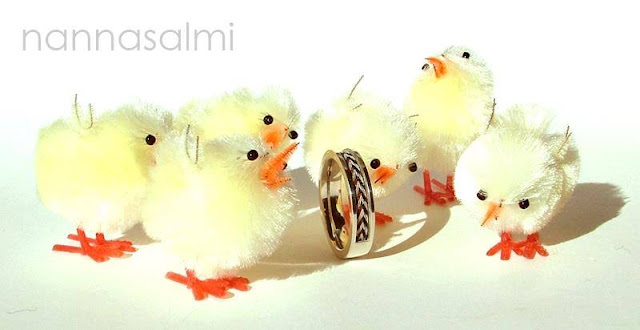 If you wish to learn more about the Fabergé Eggs and their interesting
history, please, visit Faberge.com 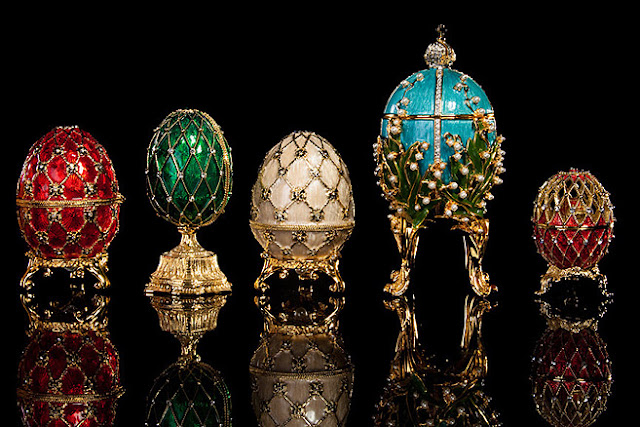 And if you wish to order yourself the best Easter egg surprise ever, contact us!
Enquiries and orders by email
minna.maattanen@nannasalmi.com

Email ThisBlogThis!Share to TwitterShare to FacebookShare to Pinterest
Tunnisteet: Holidays

The hair for the bracelet Scirocco is from my first Friesian horse Aldert. He died very
suddenly of grass disease three days after his 5th birthday. Aldert was a very gentle,
rather quiet horse. He died on the 21st of June 2013 - it took me quite some time
to be able to think of what I wish to do with his hair. 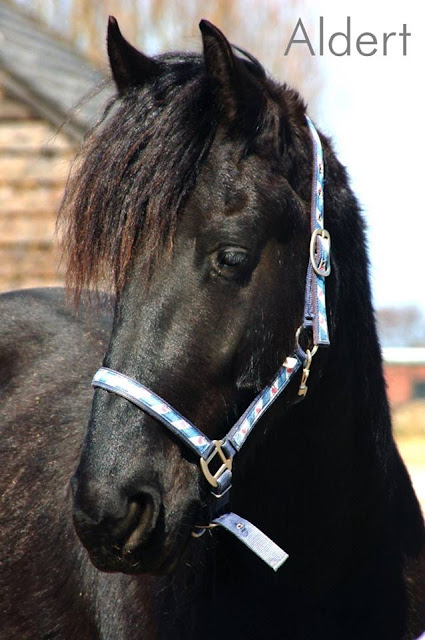 I would prefer to have the bracelet of his own hair with a few strands of
my horse Meindert, also a Friesian. Meindert is very confident and adorable horse. 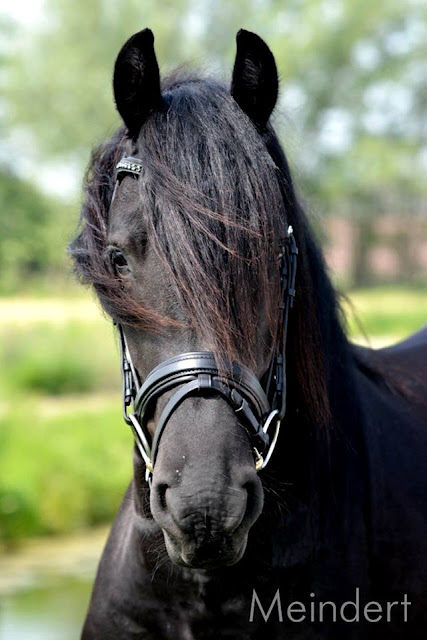 "I really love your designs and most of all,
your crafts work which is immaculate!" 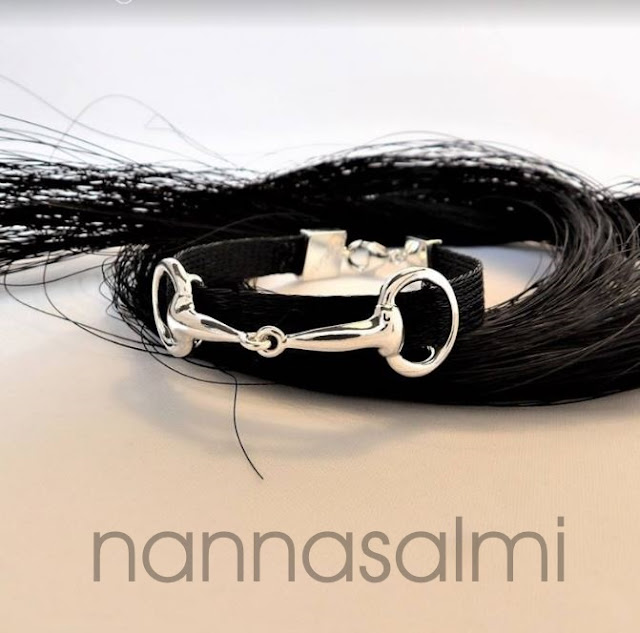 We are happy when our customers are happy! Thank you, Willemijn, for
sharing these photos with us and thank you for your kind words.

www.nannasalmi.com/bracelets
If you wish to have one made of your own horse´s tail hair,
please, contact us! Orders and enquieries also by email
minna.maattanen@nannasalmi.com

Email ThisBlogThis!Share to TwitterShare to FacebookShare to Pinterest
Tunnisteet: Bracelets

Mustangs - They Know What Freedom is...

After many surprising turns and events and with the help of few wonderful people via social media I found myself in a small town called Stockholm Wisconsin US too see three mustangs at Riverside.

Two kiger mustangs Santana and Corazon and sulphur springs mustang Rio Amigo. Couple of friendly cats, chickens, sheep and a pack of collies all living together with the gentle direction of their owner Shirley Rensink. Shirley’s warm welcome and home a way from home atmosphere guaranteed to steal a piece of my heart. 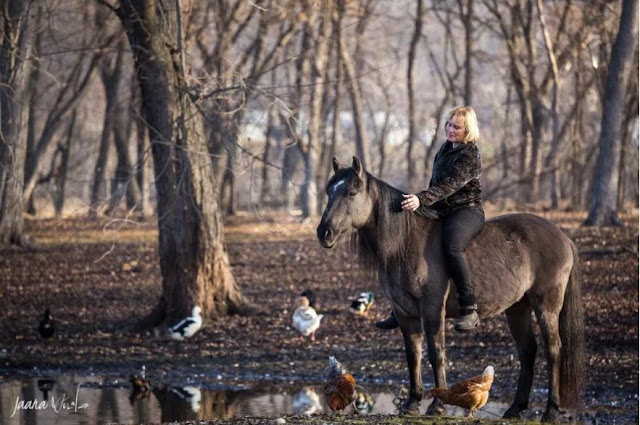 Mustang is another name for wild horse (Spanish word Mesteno, meaning ownerless) they come in a variety of shapes, colours and sizes but quite small 56 to 60 inches, (142 to 152 cm) Actually mustangs descended from once-domesticated horses, they are properly defined as feral horses. The original mustangs were Colonial Spanish horses. (Przewalski’s horse in Mongolia remains the only true wild horse in the world today.)

In 1897, the Nevada legislature passed a law allowing any citizen to shoot a wild horse on sight. This resulted in unspeakable cruelty and unlimited killing of Mustangs. Decades of bloody and indiscriminate annihilation of wild horses and burros took place in order to make more grazing land available for domestic livestock was a black chapter in the history of mans abuse of an animal.

In 1959 the first federal law was passed which prohibited the use of motorized vehicles in the capture of wild horses and prohibited the poisoning and pollution of watering holes for the purposes of trapping wild horses. Known as the Wild Horse Annie Act (PL86-234) Wild horses are the responsibility of the Bureau of Land Management (BLM), which is an agency of the US Department of the interior.

Unfortunately, in a consumer-driven North America, the wild horse has no real significant economic value. The sale of horses to slaughterhouses is financially attractive. Horse – meat is considered gourmet meat in Western Europe, Japan, and several other countries. Mustangs eat natural grasses, and have not been subjected to artificial foods, chemicals, and drugs; their meat is considered a special delicacy.

Because there is a much larger pool of captured horses than of prospective adoptive owners, a number of efforts have been made to reduce the number of horses in holding facilities. At present, there are about 34,000 mustangs in holding facilities and long-term grassland pastures. Wild horses roam primarily on public land in Nevada, Utah, Wyoming, Colorado, Idaho, Montana, Oregon, California, Arizona and New Mexico.

I had never seen mustangs before and there is something in the eyes of an animal,
that knows what freedom is.

Mustangs are round up and fenced in different methods to suddenly be homeless. They are waiting in holding facilities to get adopted but there aren’t enough people with the necessary time and skill to train these wild animals. Three that I met were lucky, Shirley adopted the stallion Santana and the mare Corazon wild when their were about 4 years old and Rio Amigo was 11 when she saved him from the previous owner.

Shirley uses positive reinforcement training methods, calm energy with sound and reward. I have never liked the word “horsewhisperer” as it has a bit advertisement echo to it but this was the closest thing to a perfect communication between horse and human that I have witnessed. I watched her work with the horses and was just utterly speechless.

I did a photoshoot one early morning, just Shirley and her mustangs.

No plans, no lighting equipment, just my camera.

Silence and the presence of mustangs. I watched Shirley work with them, one by one and just let my camera do it’s job.

Shirley shared her favorite picture and moment like this: 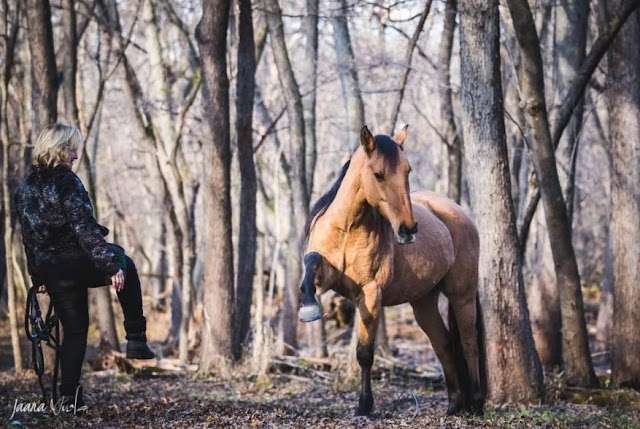 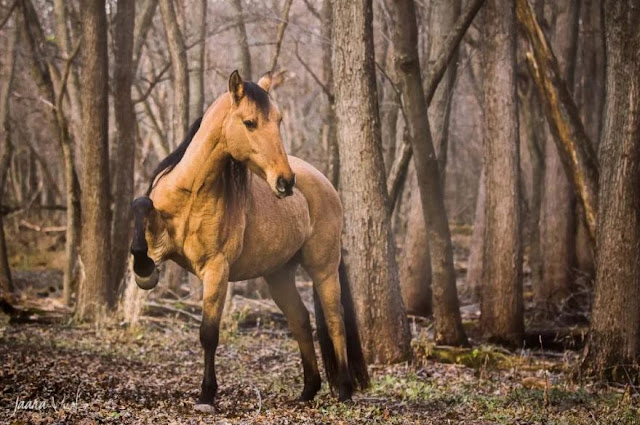 My favorite moment and photo is the shoot we did with Corazon. She always takes a back seat to the male horses. And by the time they are done with them, time is over for much work with Corazon. Every now and then, I have a student or visitor that gravitates to Corazon. But mostly, she gets less attention with others.

She is so smart, active and steady of mind.

However, I also know she will decide to go for any open gate or opportunity to be free! For us to be out of the fence and have her completely engaged with me was special! Many people have no success with Kiger Mustang mares out of the wild because the mares simply won’t bond with them. When Corazon first came to our home, she was so heartsick and actually sick and thin, that I called the BLM for help. What I was told was that there are mares in the Kiger roundups that actually die because they are depressed from the process of having their freedom and families taken away from them. They refuse to eat and become withdrawn. When she was first here, Corazon would pace day and night. Constantly looking to the bluffs across the river. I always reasoned that they were the closest thing to her open high mountain home that she came from.

However, once we became girlfriends, I believe she is as happy as any captured mustang could be. Corazon, loves the collies and has a game of running along the arena with them. She loves to run and her best running friend is Mystic, our female collie. When all the other dogs are up at the house, Mystic will often be missing. She is out simply laying on the other side of the fence watching Corazon who often is within a few feet of the collie.

That moment I took her halter off and you so beautifully captured my wild mustang mare will be held so close in my heart forever! I go back to the photos and relive the spell we were in that day while time stood still. In all my life, I have dreamed of being this close and this intimate with wild horses…

And now, I am living this dream come true. 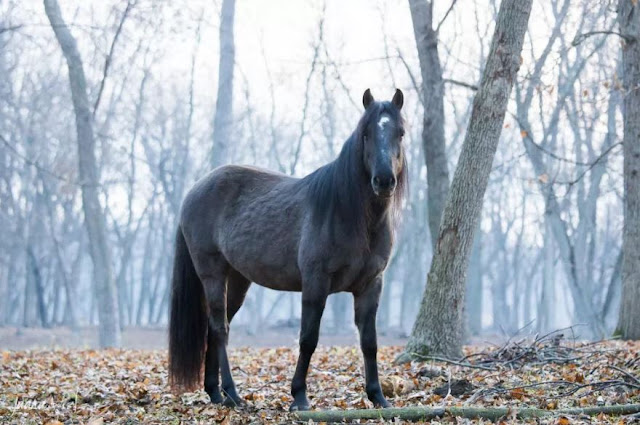 My most memorable moment was sitting alone at the stable side door stairs while the sun was setting and just watching Santana play with his good friend Pinky the cat. Mississippi river on the background, some big bird taking of from a tree above and only sound was my camera shutter as I pressed to take a picture of this moment to remember it by. 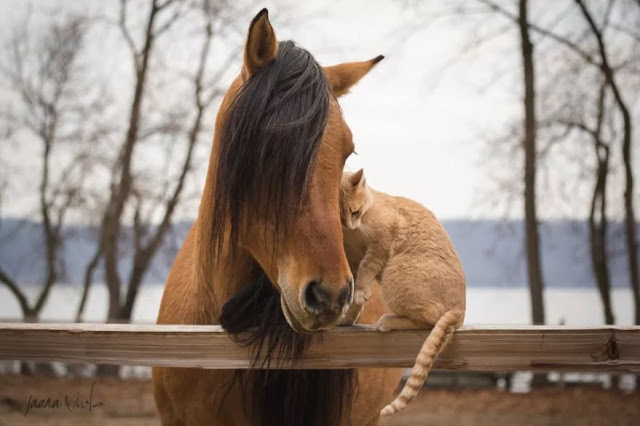 If you wish to see more, please, visit Jaana´s web page, portfolio and blog at
www.jaanavuola.com

Thank you, Jaana, for sharing this experience and your beautiful photos
with us and all our readers around the world!