A Mongol without a horse is like a bird without wings

"To appreciate the Mongol you must see him on horseback— and indeed you rarely see him otherwise, for he does not put foot to ground if he can help it. The Mongol without his pony is only half a Mongol, but with his pony he is as good as two men. It is a fine sight to see him tearing over the plain, loose bridle, easy seat, much like the Western cowboy, but with less sprawl."

There are more than 3 million horses in Mogolia, more than humans. The horses live outdoors all year. In winter it can be −40 °C, in summer +30. They search for food on their own. Barns, pastures and stables are very rare and the horses are allowed to roam free.

Horses are used both for the daily work of the nomads and in horse racing. Horses are not an expensive luxury item, but a practical part of everyday life. The mares are milked, meat will be eaten; herdsmen regard their horses as both a form of wealth and a source of the daily necessities: transportation, food and drink. 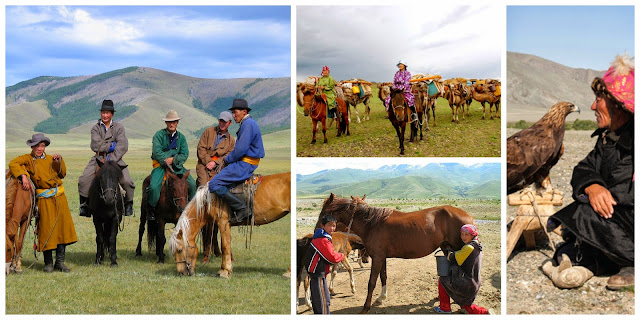 Though Mongolian horses are small (a Darkhad horse weighing only 250 kg), they are also very strong and used to carry quite large, heavy riders and loads, even 300 kg. This ability is due in part to the rider habit of frequently switching off horses. When pulling a cart, a team of four Mongol horses can draw a load of 4400 lbs for 50–60 km a day.

Horses are generally considered the province of men, although women also have extensive nowledge of horsemanship. Men do the herding, racing and make the tack. Traditionally, men also milk the mares, in modern times women, too.

These horses are allowed to live much the same as wild horses and they are not groomed like ours. The hooves are untrimmed and unshod but mongol horses have hard, strong hooves and seldom any foot problems. Mane trimming varies by region, stallions are always left untrimmed; a long, thick mane is considered a sign of strength. The sole grooming tool used is a brush and the tail is generally left unclipped. 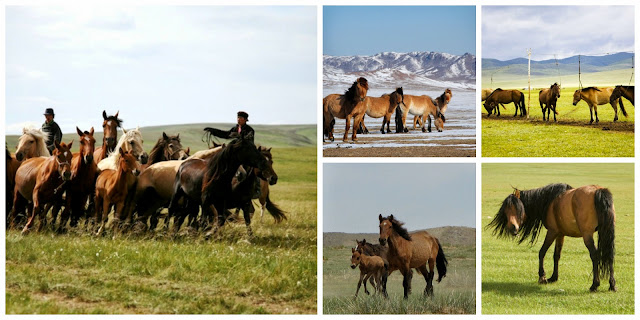 Mongolian horsemen learn everything necessary to care for a horse. There are no trainers, farriers or veterinarians, each man has to learn these things. For difficult problems, the local elders may be called in or even an outside vet if one can be found. Information is passed down orally from parent to child.

"It is a pleasure to see the Mongols in association with their horses, and to see them on horseback is a joy. The strength, swiftness and elegance of a Mongol surpass that of any ballet dancer."

Mongolian nomads have long been considered to be some of the best horsemen in the world. During the time of Genghis Khan, Mongol horse archers were capable of feats such as sliding down the side of their horse to shield their body from enemy arrows, while simultaneously holding their bow under the horse's chin and returning fire, all at full gallop. 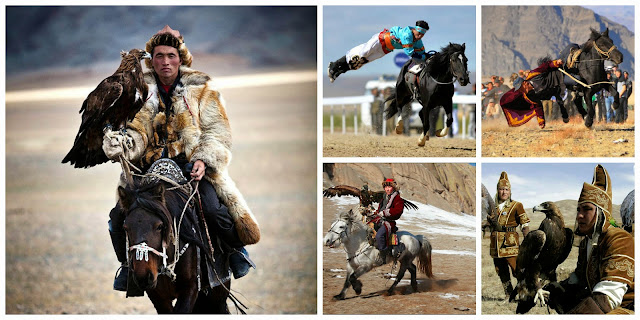 Today, as in the Middle Ages, parents will place their child on a horse and hold them there before the child can even hang on without assistance. By the age of 4, children are riding horses with their parents. By age 6, children can ride in races and by age 10, they are learning to make their own tack. 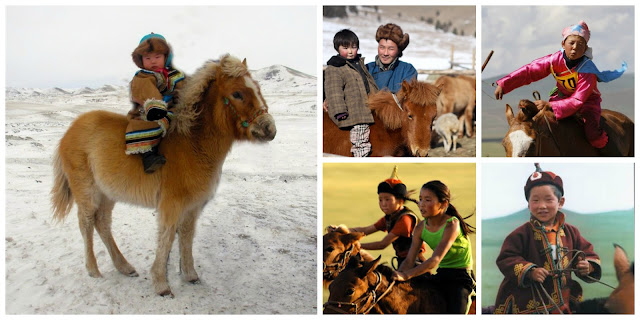 Email ThisBlogThis!Share to TwitterShare to FacebookShare to Pinterest
Tunnisteet: Horses around the world